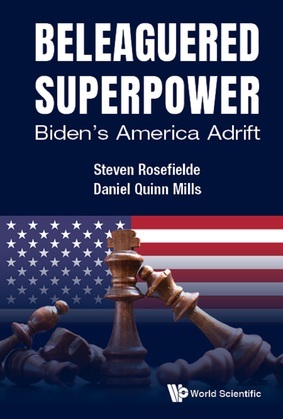 As a new president takes over in Washington, three intertwined threats imperil the world. One is internal. The others are external. The internal threat is a potent and increasingly anti-patriotic, anti-competitive, anti-meritocratic, and sky-is-the-limit federal deficit spending political current that is simultaneously diminishing and destabilizing American and global economic vitality. The two major external threats are the rising military power of Russia, China, North Korea, and Iran and a global economic malaise sowing the seeds of discontent. America's role in containing the spread of new wave authoritarianism, and fostering competitiveness and global prosperity is critical, but domestic politics is preventing the Biden administration from adequately responding to these challenges. Biden's America is adrift.America is key to the survival of the free world. America is currently a beleaguered superpower. This book is possibly the first to address the politics shaping the likely course of America's new president in world affairs. It is politics, not idealist and realist abstractions, which determine international security. The world is concerned about what course Biden will take and the likely consequences. It will be the most carefully researched of such books.The book deals explicitly and extensively with issues such as spreading authoritarianism, the emerging new Cold War, global growth retardation, civic discord, economic sanctions, arms control, soft power and the deteriorating correlation of forces. The China weapons section of the book draws from the latest assessment made by the American Department of Defense. The book also includes a section on China's new technology generating innovation model and a chapter on Covid-19.Contents: