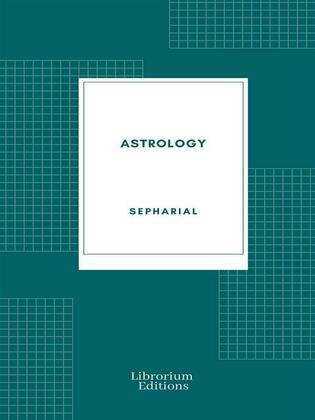 by Sepharial (Author)
Buy for €1.49 Excerpt
Nonfiction Esotericism, occult Methods of divination Astrology Paranormal Reference Handbooks & manuals
warning_amber
One or more licenses for this book have been acquired by your organisation details

From the earliest ages of the world’s history the subject of Astrology has excited the interest of, and exercised a great influence over, the minds of a certain order of thinking men. The science has never been universal in its acceptance, though it is safe to say that, with its countless adherents in the East and the ever-increasing number of its advocates in the West, there is no faith which has a more universal application than the belief in the influence of the heavenly bodies over the destinies of human beings. It is not possible within the limits of a small handbook such as this to adequately consider the philosophic paradox which makes of Freewill in man a “necessity in play”; but it is obvious that the concept is not altogether unscientific, seeing that it is customary to speak of the “free path of vibration” in chemical atoms while at the same time it is known that these atoms have their restricted characteristics, modes of motion, &c., and are all subject to the general laws controlling the bodies of which they form integral parts.