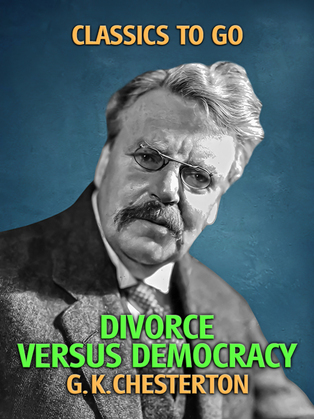 by G. K. Chesterton (Author)
Excerpt
Nonfiction Human science Philosophy Essays
warning_amber
One or more licenses for this book have been acquired by your organisation details

Excerpt: "I have been asked to put forward in pamphlet form this rather hasty essay as it appeared in “Nash’s Magazine”; and I do so by the kind permission of the editor. The rather chaotic quality of its journalism it is now impossible to alter. The convictions upon which it is based are unaltered and unalterable. Indeed, in so far as circumstances have since affected them, they are greatly strengthened. In so far as there was something sporadic and seemingly irrelevant in the writing, it was partly because I was contending against an evil that was diffused and indefinable, at once tentative and ubiquitous. Since then that disease has come to a head and burst; primarily in the North of Europe."