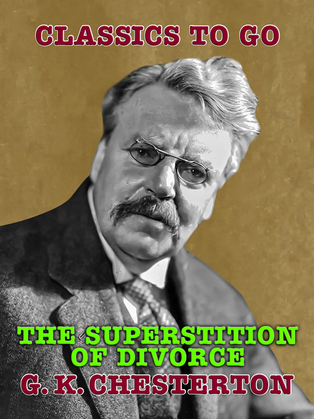 The Superstitions of Divorce

by G. K. Chesterton (Author)
Excerpt
Nonfiction Human science Philosophy Essays
warning_amber
One or more licenses for this book have been acquired by your organisation details

Excerpt: "It is futile to talk of reform with reference to form. To take a case from my own taste and fancy, there is nothing I feel to be so beautiful and wonderful as a window. All casements are magic casements, whether they open on the foam or the front-garden; they lie close to the ultimate mystery and paradox of limitation and liberty. But if I followed my instinct towards an infinite number of windows, it would end in having no walls. It would also (it may be added incidentally) end in having no windows either; for a window makes a picture by making a picture-frame. But there is a simpler way of stating my more simple and fatal error. It is that I have wanted a window, without considering whether I wanted a house. Now many appeals are being made to us to-day on behalf of that light and liberty that might well be symbolised by windows; especially as so many of them concern the enlightenment and liberation of the house, in the sense of the home. Many quite disinterested people urge many quite reasonable considerations in the case of divorce, as a type of domestic liberation; but in the journalistic and general discussion of the matter there is far too much of the mind that works backwards and at random, in the manner of all windows and no walls."