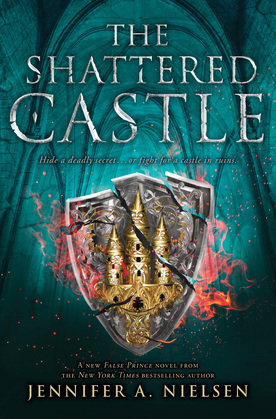 Ascendance #5
by Jennifer A. Nielsen (Author)
Buy for $17.99 Excerpt
Fiction Juvenile & young adult Fantasy, magic Young adult
warning_amber
One or more licenses for this book have been acquired by your organisation details
Acclaimed author Jennifer A. Nielsen brings her signature twists and high-stakes action to the fifth installment of the New York Times bestselling Ascendance Series!

King Jaron has outwitted the Prozarians and returned to his own kingdom with one secret in his pocket that not even his friends know about. He's hoping that secret will help him finally bring stability to Carthya.

But a surprise attack on his own land -- on the castle itself -- reminds Jaron that nothing is easy. The Prozarian Monarch threatens to crumble Jaron's entire kingdom. And that's not the only thing in danger: With old enemies and new rumors circling around him, even Jaron's relationship with Imogen is uncertain.

This former False Prince will need his best tricks and many allies at his side to hold Carthya together.