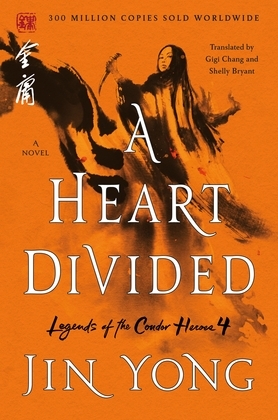 by Jin Yong (Author), Gigi Chang (Translator), Shelly Bryant (Translator)
Excerpt
Fiction Fantasy Historical
warning_amber
One or more licenses for this book have been acquired by your organisation details

A Heart Divided is the fourth and final volume in Jin Yong’s high stakes, tension-filled epic Legends of the Condor Heroes, where kung fu is magic, kingdoms vie for power and the battle to become the ultimate kung fu master unfolds.

Guo Jing and Lotus have escaped Qiu Qianren’s stronghold, but at a steep price: Lotus has been mortally wounded. The only one who could save her life is Duan, King of the South, a man skilled and renowned for his healing. But little do they know that danger awaits, including a plan to tear them apart.

As the Mongol armies descend on China, Guo Jing will have to make the toughest decision of all—rejoin the people who raised him to avenge his father or fight against his homeland. The ultimate battle for China and Guo Jing’s future plays out in the sweeping, high stakes adventure of A Heart Divided, where one choice can change the world.