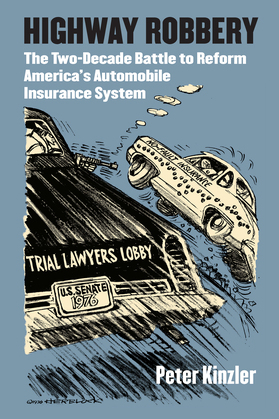 In Highway Robbery Peter Kinzler delivers a fast-paced behind-the-scenes account of two federal legislative efforts twenty years apart—one from the political left and one from the right—to reform America’s auto insurance system to make it fairer and more affordable. He explains how the legislation was designed to achieve those objectives and describes the political challenge of trying to overcome the entrenched special interest opposition of those who stood to lose billions—trial lawyers and insurers—if the new no-fault system were adopted.

Highway Robbery provides readers with both a primer on how fault and liability auto insurance, no-fault, and no-fault choice insurance policies work and who benefits most from which system. Peter Kinzler, with years of experience as a congressional staffer and in the private sector, is the perfect guide through these important policy and political fights, enlivened with revealing firsthand sketches of the legislators, staffers, academics, and lobbyists who played major roles in these attempts as well as their interplay with each other. Drawing upon his decades of engagement with the issues Kinzler shows how thoughtful and skilled members of Congress, good staff, and thorough academic research can lay the groundwork for important reform legislation; in doing so he provides a model for restoring Congress’s effectiveness, whenever it chooses to resume exercising its constitutional authority as the legislative branch of government.

Highway Robbery details how the trial bar used the levers of political power first to undermine state no-fault laws and then to use the weaknesses they had implemented in the laws to undermine passage of federal legislation. It also describes the surprising alliance in opposition between the trial bar and famed consumer advocate Ralph Nader. No-fault continues to hold the promise of better compensation and dramatic premium reductions, with the largest savings available to those who need them most—low- and moderate-income drivers. The most likely scenario for further federal consideration of auto insurance reform would be in the context of congressional action on universal health insurance.