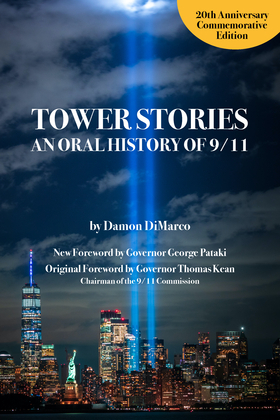 Damon DiMarco's Tower Stories: An Oral History of 9/11 (20th Anniversary Commemorative Edition), eternally preserves a monumental tragedy in American history through the voices of the people who were in New York City on that fateful day. At the same time, the individuals featured in the book speak to the myriad ways by which Americans rose to meet the challenges presented by 9/11, and celebrates the many heroes that are found within its pages.

In the tradition of Studs Terkel, DiMarco's literary time capsule includes a wide variety of viewpoints, including: The small group of people who miraculously made it safely down from the 89th floor of Tower 1, the New York Times reporter who desperately fought her way through the fleeing crowds to get back into Lower Manhattan, the paramedic who set up a triage area 200 yards from the base of the Towers before they collapsed, and the bereaved citizens of New York City who struggled to get on with their lives in the days and months following the tragic event, among dozens of others.

The original edition of Tower Stories was one of the best-selling and most critically acclaimed books on 9/11 ever published, and for this 20th Anniversary Commemorative Edition, DiMarco has conducted additional interviews that offer a contemporary perspective on the 9/11 tragedy. The individuals DiMarco interviewed for the new edition include:

• Alice Greenwald (President and CEO of the 9/11 Memorial & Museum)

The 20th Anniversary Commemorative Edition of DiMarco's moving oral history preserves all of the voices from the original edition for generations to come, while offering new insights that benefit from twenty years of reflection on the world-shattering event.

The voices in Tower Stories are in turn haunting and heartbreaking, always emotional, yet ultimately heroic. It’s no wonder that MSNBC called Tower Stories “Arguably the most successful attempt at capturing the enormity of the events of 9/11,” while Publishers Weekly wrote that “DiMarco’s contribution to the memory of that horrific day is enormous; the testimonies collected here form a one-of-a-kind account.”