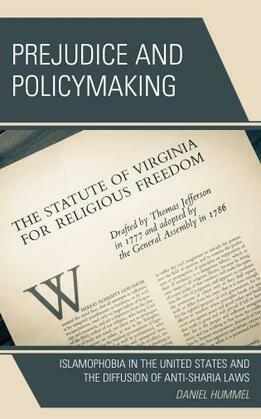 The United States was founded on principles enshrined in the Constitution. One of the foremost of these principles is religious freedom. Unfortunately, this freedom has not been shared by all equally. The place of Islam in the United States has always been controversial. This controversy expanded following the attacks on 9/11 and the rise of nationalist movements that aimed to narrowly define American identity. The hatred of Islam, otherwise known as Islamophobia, has risen to new heights fueled by recurring events and various anti-Muslim hate groups. This has manifested in anti-mosque protests, hate crimes and prejudicial legislation. This book is focused on one form of this legislation, the anti-Sharia laws, otherwise known as the foreign law bans. Sharia is also known as Islamic law and as the physical manifestation of Islam in practice. Several states have passed these laws with many other states introducing them several times with the intention of banning the use of Sharia in civil courts. This book is a study of the factors most closely associated with whether a state has this law and how many times this bill has been introduced in the legislature. These include political, demographic, religious and ideological factors.