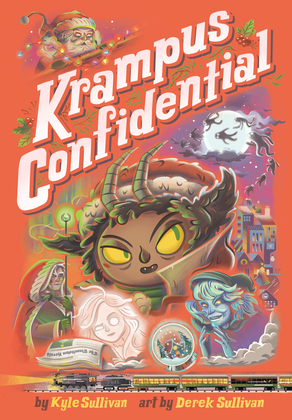 It’s almost Christmas, but the nights in Tinseltown are anything but silent.

Ruprecht, a twelve-year-old krampus and wannabe detective, gets more than he bargained for when he takes the case of a terrified elf. Finding himself at the top of the Tinseltown Police Department’s naughty list, Ruprecht is joined by his best friend, a ghost named Marley, to explore the underbelly of this festive but gritty metropolis, solve the mystery, and clear his name for good.

Book 3 of the Hazy Fables middle-grade series, this quick-witted parody of Dashiell Hammett’s The Maltese Falcon follows up its acclaimed predecessors, Zombie, Or Not to Be (a brainy adaptation of Hamlet) and Hobgoblin and the Seven Stinkers of Rancidia (a Kirkus Best Book of 2019). Featuring powerful witches, a greedy goblin, a colossal cat, a "psychic" reindeer, and a platoon of shadowy phantoms, this whip-smart thriller celebrates the delightfully dark side of Christmas with mystery, intrigue, and a sleighful of characters from European folklore.