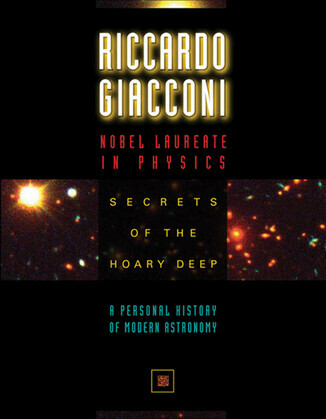 Secrets of the Hoary Deep

by Riccardo Giacconi (Author)
Excerpt
Nonfiction Science and technics Science Astronomy Astrophysics & space science Others History
warning_amber
One or more licenses for this book have been acquired by your organisation details
A Noble Prize–winning Italian astrophysicist shares his scientific autobiography and the history of the development of contemporary astronomy.

The discovery of x-rays continues to have a profound effect on the field of astronomy. It has opened the cosmos to exploration in ways previously unimaginable, and fundamentally altered the methods for pursuing information about outer space. Nobel Prize–winner Riccardo Giacconi’s highly personal account of the birth and evolution of x-ray astronomy reveals the science, people, and institutional settings behind this important and influential discipline.

Part history, part memoir, and part cutting-edge science, Secrets of the Hoary Deep is the tale of x-ray astronomy from its infancy through what can only be called its early adulthood. It also details how the tools, techniques, and practices designed to support and develop x-ray astronomy were transferred to optical, infrared, and radio astronomy, drastically altering the face of modern space exploration. Giacconi relates the basic techniques developed at American Science and Engineering and explains how, where, and by whom the science was advanced.

From the first Earth-orbiting x-ray satellite, Uhuru, to the opening of the Space Telescope Science Institute and the lift-off of the Hubble Space Telescope to the construction of the Very Large Telescope, Giaconni recounts the ways in which the management methods and scientific methodology behind successful astronomy projects came to set the standards of operations for all subsequent space- and Earth-based observatories. Along the way he spares no criticism and holds back no praise, detailing individual as well as institutional failures and successes, reflecting upon how far astronomy has come and how far it has yet to go.
Protection
DRM Free
Format
EPUB
Publication date
May 04, 2021
Publisher
Johns Hopkins University Press
Page count
622
ISBN
9781421402062
Paper ISBN
9780801888090
File size
10 MB