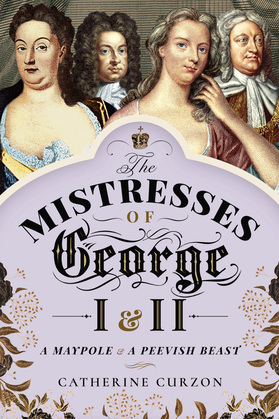 The Mistresses of George I and II

When George I arrived in England he found a kingdom in turmoil. Mistrustful of the new monarch from Hanover, his subjects met his coronation with riots. At George’s side was his mistress, Melusine von der Schulenberg, whilst his ex-wife languished in prison. Known as the Maypole thanks to her eye-catching figure, Melusine was the king’s confidante for decades. She was a mother to his children and a queen without a crown.

George II never forgave his father for tearing him from his mother's arms and he was determined to marry for love, not duty. Though his wife, Caroline of Ansbach, proved to be a politically gifted queen, George II turned to another for affection. She was Henrietta Howard, the impoverished Countess of Suffolk, and she was desperate to escape her brutish husband. As the years passed, the royal affair became a powerplay between king and queen and the woman who was mistress to one and servant to another.

Melusine and Henrietta's privileged position made them the envy of every courtier. It also made them a target of jealousy, plotting and ambition. In the tumultuous Georgian court, the bedroom and the throne room weren't so far apart.