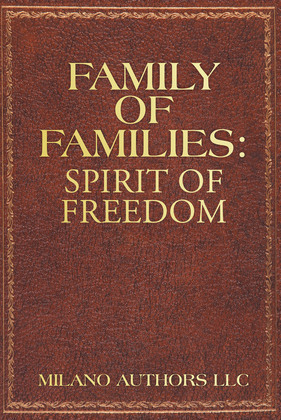 by Llc,Milano Authors (Author)
Buy for $9.99 Excerpt
Fiction Christian Historical
warning_amber
One or more licenses for this book have been acquired by your organisation details

Family of Families: Spirit of Freedom, the first trilogy, was a fictionalized account of families over several generations. Though fiction, all the individuals were real, except for some of those introduced by a first name only. They were the everyday common people who all had goals of freedom and a better world.

Though a fictional narration, places and dates were as accurate as possible. Some of the stories contained, however, happened as portrayed. The storyline was intended to reflect life as largely experienced by the common individual during their time. A listing of references provided sources for any reader wanting to learn more. It also provided credit for contributing to this story.

A goal for this story was for the reader to explore life through the eyes of people as it existed during the American Colonial era through the Revolutionary War. The primary character was the spirit of freedom. This spirit was portrayed within the various individuals as they sought their freedom within the backdrop of a country seeking its freedom from England. As appropriate, there was a significant reference to religion and churches because such was the prominence of life during that era.