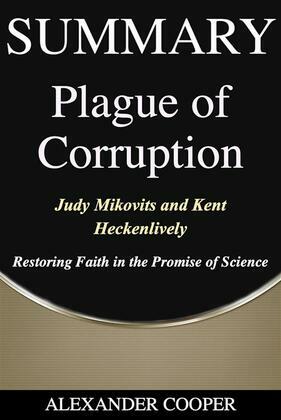 Summary of Plague of Corruption

by Alexander Cooper (Author)
Buy for €2.49 Excerpt
Nonfiction Medical AIDS & HIV Science and technics Science Life sciences Biology Others Research & methodology
warning_amber
One or more licenses for this book have been acquired by your organisation details

Summary of Plague of Corruption

Summary of Plague of Corruption by Judy Mikovits and Kent Heckenlively. One of the most fashionable medical interventions today is undoubtedly vaccination. A generation or two ago children obtained immunity to childhood diseases (chicken pox, measles and mumps) by attending parties. If a child contracted one of the common (but relatively unthreatening) childhood diseases all the children in the neighborhood would be invited round for tea and games. Those children attending the party who contracted the disease would put up with spots for a week or so and then recover.

Parents would, probably justifiably, assume that a child who hadn't caught the disease had quite likely acquired immunity to it. The system was simple, uneventful and relatively safe and it worked because the human immune system is designed to learn from experience. When the body produces special lymphocytes to fight pathogens those lymphocytes remain sensitized to specific infections and will respond to future infections by producing antibodies. With the aid of these antibodies the body can wipe out an appropriate invading organism before the infection can take hold. When this happens the body is said to be protecting itself by having developed immunity.

These days, children have vaccinations. Loads of them. It is the fashion. It is our way. Drug companies and doctors make huge amounts of money out of it. Vaccination is all about money. Drug companies make billions. Doctors make thousands. The big question is not `Is it safe?' or `Does it work?' but `Is it profitable?'

Corrupt acts can take several forms and its impact is felt in virtually all parts of our country. Those who have political power engage in corrupt practices when they leverage their power to enrich their families. Well, they even demand that we give them more power to fulfill their goal of fixing our problems.

Are these politicians genuinely interested in power for a good cause?

What about those who tilt the scales of justice in a bid to ensure that their friends and family benefit? Politicians, especially the progressives, have always made the governed to believe that they are acting in their best interest.

But, are they genuinely serving the interest of the governed or their personal interests and that of their family, friends and wealthy donors?

It's common to hear politicians claim that the major reason why they are interested in power is to fix problems. Can we really take them at their word? History has taught us that corruption follows power, which implies that the more people accumulate power, the higher the tendency for them to exploit the power acquired for their benefit.

Have you ever wondered why progressives claim to fight for the poor and middle-class during campaigns and end up taking the side of wealthy donors and corporations?

In what ways have they leveraged the votes of the poor and the wealth of the rich to ascend to power only to turn back and fight the same poor that voted them into power?