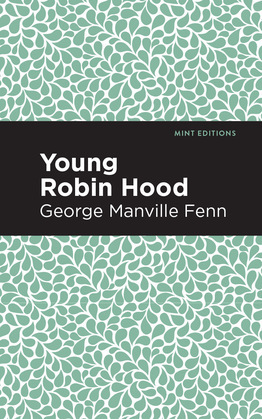 “Mr. Fenn is in the front rank of writers of stories for boys”-Liverpool Mercury

“Mr. Fenn’s books are among the best, if not altogether the best, of the stories for boys.” -Pictorial World

George Manville Fenn’sYoung Robin Hood (1899)is an enchanting story for younger readers about a boy who is lost in the woods and is taken in by Robin Hood and his merry men. This timeless and charming tale of adventure, friendship, and archery emboldens the positive virtues of kindness, charity, and forgiveness.

When the young boy Robin, the son of the Nottingham sheriff, is passing through Sherwood Forest with a servant and his pack mules they are suddenly ambushed by a gang of green-clad hooligans. Robin’s reckless caretaker, in the chaos, leaves the boy alone in the forest, deserted and frightened. When Robin is once again confronted by a bully in the woods he is swiftly rescued by none other than Robin Hood and his gang, including the beloved Little John and Maid Marian. They take the boy into their care, where he is taught the ways of the forest, explores the terrain, and learns the art of archery. For all fans of the legend of Robin Hood and his merry men, Young Robin Hood<\I> is an essential read.

With an eye-catching new cover, and professionally typeset manuscript, this edition of Young Robin Hood is both modern and readable.