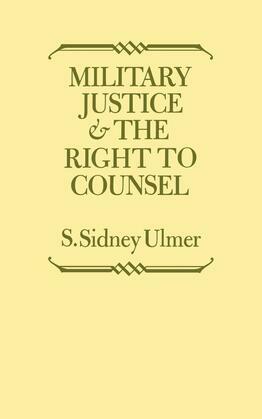 Military Justice and the Right to Counsel

by S. Sidney Ulmer (Author)
Buy for $12.95 Excerpt
Nonfiction Law History of law Rights transverse
warning_amber
One or more licenses for this book have been acquired by your organisation details

In Military Justice and the Right to Counsel, S. Sidney Ulmer seeks to explore and compare the right to counsel that has been afforded the American serviceman and that which has been granted his citizen counterpart in the civil courts. The civil and constitutional rights of the serviceman and the civilian in the context of criminal prosecutions are implemented in two distinct legal settings a civil system of state and federal courts, including the United States Supreme Court, and a military system composed of courts martial, boards of review, and the United States Court of Military Appeals. Ulmer suggests that in a political system in which individual preferences are given equal weight, the values of the priorities adopted in the civil society will inevitably encroach upon the variant values of any military sub-society involving substantial numbers of people who participate in both.