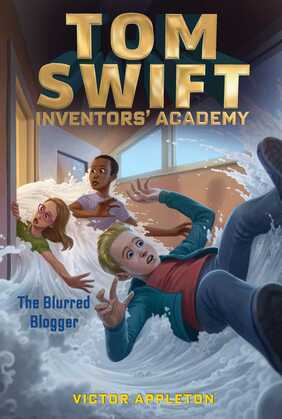 Tom and his friends track down a mysterious blogger who pushes pranks too far in this seventh novel in Tom Swift Inventors’ Academy—perfect for fans of The Hardy Boys or Alex Rider series.

A series of videos called “The Not-so-Swift Academy” are the talk of Tom Swift’s tech-focused school. A mysterious host whose face is blurred shows hidden camera footage of different students being pranked—from a rubber tarantula leaping out of one of the terrariums to water flash freezing.

Tom and his classmates are on edge, wondering which unlucky student will be the star of the next episode. They’re on the lookout for hidden cameras and searching for signs of the next prank around every corner and behind every locker door. Tired of the tension, Sam decides to take matters in her own hands. She’s going to bust the blogger by studying the videos for clues.

But as Sam pieces the clues together, she unveils the biggest prank of all—someone’s trying to frame her for the videos! Can Tom and his friends unmask the blurred blogger and clear Sam’s name before they become the targets of the prankster’s increasingly nefarious stunts?