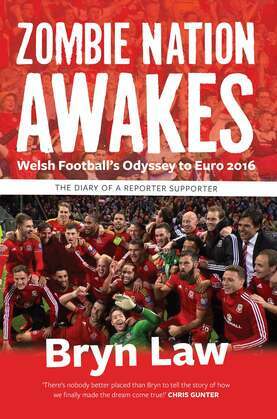 by Bryn Law (Author)
Buy for $14.00 Excerpt
Nonfiction Nature, recreation and sports Sports & recreation Soccer
warning_amber
One or more licenses for this book have been acquired by your organisation details

This is the book that many Welsh football fans thought they'd never get to read; a tale of outstanding performances at home and away, qualification success and a FIFA Top Ten ranking, and the best thing is...it's all true! Zombie Nation Awakes tells the inside story of Wales' amazing journey to qualifying for the finals of Euro 2016 in France; the first time Wales has played in finals of a major tournament since 1958. Packed with passion, tinged with sadness, and written with great humour, Bryn Law's diary of the campaign perfectly describes the emotions of following the Welsh national football team; when years of despair vanished in a wave of glorious euphoria to the sounds of Zombie Nation. It will bring a tear to your eye and put a massive grin on your face. Game by game, and after an almost disastrous start in Andorra, Bryn's diary reflects the growing but guarded optimism of the players, the supporters and the Welsh nation, as he reported on the campaign for Sky Sports. His passion for Welsh football shines through on every page of Zombie Nation Awakes and fans of Welsh football will love it.