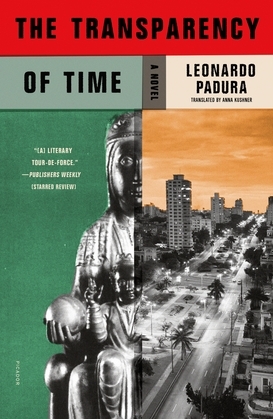 The Transparency of Time

Mario Conde is facing down his sixtieth birthday. What does he have to show for his decades on the planet? A failing body, a slower mind, and a decrepit country, in which both the ideals and failures of the Cuban Revolution are being swept away in favor of a new and newly cosmopolitan worship of money.

Rescue comes in the form of a new case: an old Marxist turned flamboyant practitioner of Santería appears on the scene to engage Conde to track down a stolen statue of the Virgen de
Regla—a black Madonna. This sets Conde on a quest that spans twenty-first century Havana as well as the distant past, as he delves as far back as the Crusades in an attempt to uncover the true provenance of the statue.

Through vignettes from the life of a Catalan peasant named Antoni Barral, who appears throughout history in different guises—as a shepherd during the Spanish Civil War, as vassal to a feudal lord—we trace the Madonna to present-day Cuba. With Barral serving as Conde’s alter ego, unstuck in time, and Conde serving as the author’s, we are treated to a panorama of history, and reminded of the impossibility of ever remaining on its sidelines, no matter how obscure we may think our places in the action.

Equal parts The Name of the Rose and The Maltese Falcon, The Transparency of Time cements Leonardo Padura’s position as the preeminent literary crime writer of our time.