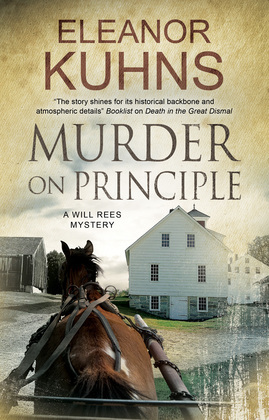 by Eleanor Kuhns (Author)
Buy for $1.99 Excerpt
Fiction Mystery & detective Historical Christian Historical
warning_amber
One or more licenses for this book have been acquired by your organisation details

Will Rees faces a moral dilemma when a slaveholder is murdered while attempting to recapture a former slave: should he pursue lawful justice or should he let the killer go free?

November 1800, Maine. After helping their long-time friend Tobias escort his wife, along with a liberated slave and her child, from the Great Dismal back to Durham, Will and Lydia Rees’s lives are interrupted when a dead body is found near their home.

The body is that of Mr Gilbert, a slaveholder from the Great Dismal. Was he murdered in pursuit of the former slaves?

When it’s discovered Gilbert was infected with smallpox, and Gilbert’s sister arrives demanding justice and the return of her absconded slaves, Will is torn. Finding the killer could lead to the recapture of the former slaves. Letting them go free could result in a false arrest and endanger the Durham community. Will must make a choice . . .