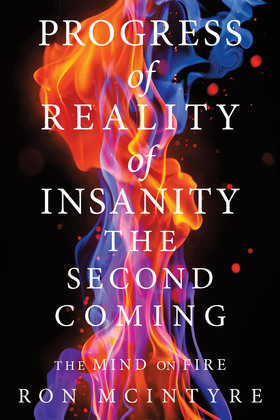 Progress of Reality of Insanity the Second Coming

by Ron McIntyre (Author)
Buy for $3.99 Excerpt
Nonfiction Human science Philosophy Essays Fiction Poetry
warning_amber
One or more licenses for this book have been acquired by your organisation details

The mind excited with blazes of fiery thoughts, flashes forth wonders of amazement far past the imaginable, somewhere in the far-out extremes beyond non-existence, somewhere God is frightened to wander around!
I have seen him tip-toe across the stars and stroll around in the sky like he owned them. And command the lightning where to strike!

His powers of wonderment cause hysterical raptures of ecstasy! He can transport a man’s mind from reality into oblivion. His frenzied mind teeters on the brink of infinity, his thinking is so complex he had to invent new words to explain them.
He can force the trumpets of the seventh heavenly plague to blast before their appointed time, and confuse the armies in heaven to where they do not know whose command to follow.

Lightning and voices and thunders exist only by his permission! He commands the powers in heaven, the angels fall at his feet, the sun no longer sheds light and the moon turns to blood and the stars fall from the sky.

Who is this; The Almighty, The Only-Begotten; or the Third in Command, no (though some think so), this is the author: Ron McIntyre!