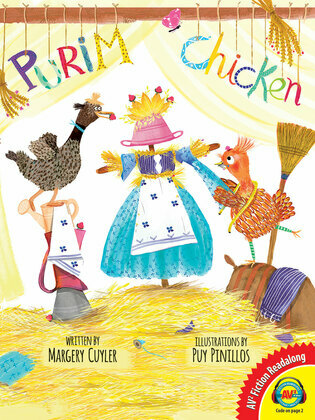 by Margery Cuyler (Author)
Buy for $34.28 Excerpt
Fiction Juvenile & young adult Themes Holidays & celebrations Other, non-religious
warning_amber
One or more licenses for this book have been acquired by your organisation details

It’s Purim and the animals on the farm are planning their celebration! They decide to sing songs, wear costumes, and put on a play about Queen Esther. It’s fun until Quack the duck, the star of their show, goes missing! Cluck the hen must be brave like Queen Esther and go in search of Quack near the fox’s den. But when Cluck finds Quack, the duck's feathers are ruffled from her time with the fox. She can't perform! Will Cluck have enough courage to play Queen Esther and save the show?