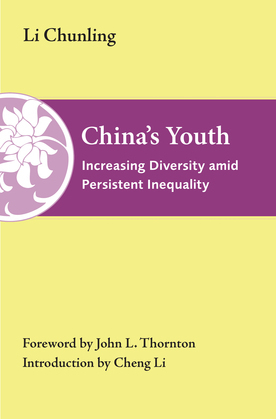 This book by a prominent Chinese sociologist explores how China’s youth will influence the country’s future. Focusing on millennials—those born between the early 1980s and the mid-1990s—the book examines the status, lifestyles, attitudes, values, and behaviors of this key segment of the country’s population. Li Chunling’s study presents a native Chinese perspective on the increasingly diverse generation that at some point will assume leadership of the country.

Among the key questions addressed in the book are: How do Chinese millennials differ both from preceding generations in China and from their counterparts around the world? How can current and future relations between Chinese millennials and the Chinese government be assessed? And, what are the factors or fault lines that have shaped the intra-generational differences among China’s young people?

Members of this age cohort are extraordinary, and in some respects unique, in contemporary China. Their ascent has accompanied five historic and far-reaching developments. These include China’s rapid economic rise, the adoption of the one-child-per-family policy, the largest domestic rural-to-urban migration in Chinese history, the opening of extensive educational opportunities abroad, and the arrival of the digital era. Young Chinese citizens have developed a comprehensive understanding of the world much faster than previous generations; millennials see themselves not as extensions of the past, but rather as the innovators of the country’s future.

Through expansive and in-depth empirical research on Chinese millennials and younger age cohorts (people in their late teens and early 20s), Dr. Li’s book illustrates how China’s younger adults reflect the growing diversity and persistent inequality in society. The book also explores how their distinct characteristics and views will shape the country’s trajectory. For the outside world, developing a better understanding of this unique generation is an urgent task, given that China now has more influence on the global economy and regional security than at any other point in modern history.