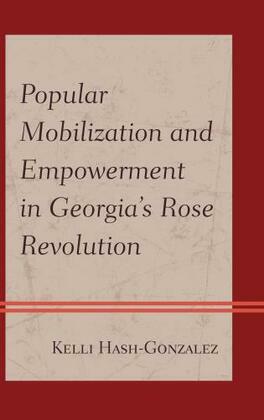 While other studies explain the Rose Revolution in terms of the contribution of the “power players,” Popular Mobilization and Empowerment in Georgia’s Rose Revolution, by Kelli Hash-Gonzalez, adds to our understanding of the event by examining it from the perspective of ordinary citizens. Hash-Gonzalez shows how the movement frames targeted people’s emotions, as well as their beliefs and values to more effectively mobilize them for action. Using the election fraud as a focal point, movement leaders and activists amplified the emotions and beliefs incorporated in the themes of injustice, dignity, and duty, which supported movement participation. They also appealed to people’s emotions and beliefs in an effort to transform the common frame of political powerlessness, which worked against participation. The book also examines the role that emotional energy played in mobilization. The achievement of a critical mass of protestors was surprising, given the hopelessness, cynicism, and alienation in the region’s political culture. This level of participation was essential for movement emergence and success. Without the people, none of the other necessary factors—NGOs, civil society, financial resources, foreign support or interference, the media, government vulnerability, political elites, opposition unity—could have achieved a legitimate regime change. Popular Mobilization and Empowerment in Georgia’s Rose Revolution is an in-depth examination of a significant political moment from the perspective of the people who lived it.