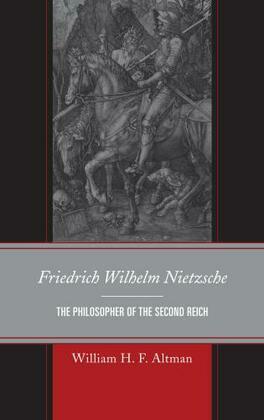 When careful consideration is given to Nietzsche’s critique of Platonism and to what he wrote about Bismarck, Kaiser Wilhelm, and to Germany’s place in “international relations” (die Große Politik), the philosopher’s carefully cultivated “pose of untimeliness” is revealed to be an imposture. As William H. F. Altman demonstrates, Nietzsche should be recognized as the paradigmatic philosopher of the Second Reich, the short-lived and equally complex German Empire that vanished in World War One. Since Nietzsche is a brilliant stylist whose seemingly disconnected aphorisms have made him notoriously difficult for scholars to analyze, Friedrich Wilhelm Nietzsche is presented in Nietzsche’s own style in a series of 155 brief sections arranged in five discrete “Books,” a structure modeled on Daybreak. All of Nietzsche’s books are considered in the context of the close and revealing relationship between “Friedrich Wilhelm Nietzsche” (named by his patriotic father after the King of Prussia) and the Second Reich. In “Preface to ‘A German Trilogy,’” Altman joins this book to two others already published by Lexington Books: Martin Heidegger and the First World War: Being and Time as Funeral Oration and The German Stranger: Leo Strauss and National Socialism.