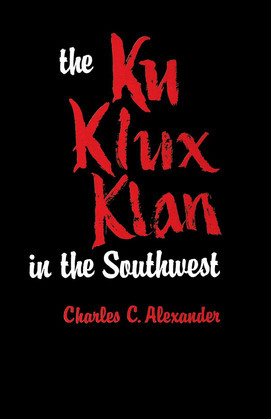 The Ku Klux Klan in the Southwest

This is a study of a disturbing phenomenon in American society—the Ku Klux Klan—and that eruption of nativism, racism and moral authoritarianism during the 1920s in the four states of the Southwest—Texas, Louisiana, Oklahoma, and Arkansas—in which the Klan became especially powerful. The hooded order is viewed here as a move by frustrated Americans, through anonymous acts of terror and violence, and later through politics), to halt a changing social order and restore familiar orthodox traditions of morality. Entering the Southwest during the post-World War I period of discontent and disillusion, the Klan spread rapidly over the region and by 1922 its tens of thousands of members had made it a potent force in politics.

Charles C. Alexander finds that the Klan in the Southwest, however, functioned more as vigilantes in meting extra-legal punishment to those it deemed moral offenders than as advocates of race and religious prejudice. But the vigilante hysteria vanished almost as suddenly as it had appeared; opposition to its terrorist excesses and its secret politics led to its decline after 1924, when the Klan failed abysmally in most of its political efforts. Especially significant here are the analysis of attitudes which led to this revival of the Klan and the close examination of its internal machinations.