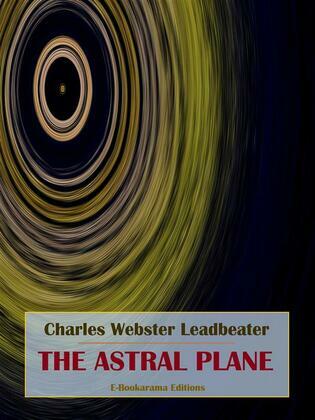 by Charles Webster Leadbeater (Author)
Buy for €0.49 Excerpt
Nonfiction Human science Philosophy Metaphysics Esotericism, occult Methods of divination Astrology
warning_amber
One or more licenses for this book have been acquired by your organisation details

First published in 1895, "The Astral Plane" (also known as "The Astral Plane: Its Scenery, Inhabitants & Phenomena") by Charles Webster Leadbeater is a Theosophical Classic describing what the Astral Plane is, its advantages, its dangers, what types of spirits inhabit it, what it is like, and how to get there.

An engrossing document of the public fascination with the paranormal at the turn of the 20th century, "The Astral Plane" explains one aspect of theosophy, the metaphysical doctrine that seeks to find the unified truth buried in all of humanity's religions.

On this guided tour of one of the "various planes of the universe," you'll meet black magicians, vampires, werewolves, elemental essences, fairies, and angels. You'll encounter phenomena including churchyard ghosts, mysterious bell ringing, clairvoyance, second sight, spirit photographs, slate writing, and levitation. And you'll learn why darkness is absolutely required at a seance.