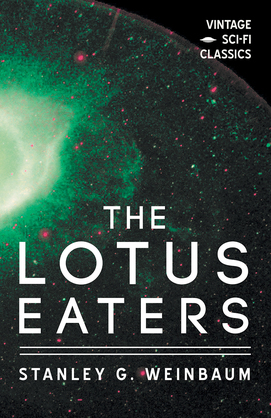 by Stanley G. Weinbaum (Author)
Buy for $4.99 Excerpt
Fiction Science fiction Space opera and planet opera Adventure
warning_amber
One or more licenses for this book have been acquired by your organisation details

This is a classic science fiction short story by Stanley G. Weinbaum that was originally published in Astounding Stories in 1935. This story is a sequel to Parasite Planet and continues the tale of Hamilton 'Ham' Hammond and Patricia Burlingame. The pair are now married and have been commissioned by the Smithsonian Institute to explore the night-side of Venus. They discover a species of highly intelligent plants that appear to have no survival instincts and are seemingly indifferent to the Trioptes that attack and consume them. Burlingame names them 'the Lotus Eaters of Venus'.
This work is part of our Vintage Sci-Fi Classics Series, a series in which we are republishing some of the best stories in the genre by some of its most acclaimed authors, such as Isaac Asimov, Marion Zimmer Bradley, and Robert Sheckley. Each publication is complete with a short introduction to the history of science fiction.