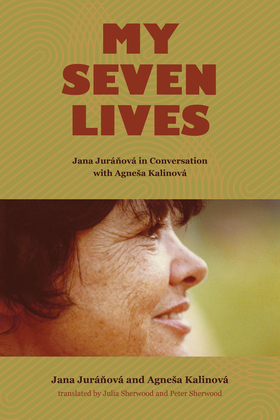 by Jana Juráňová (Author), Agneša Kalinová (Author)
Buy for $29.99 Excerpt
Nonfiction History Holocaust History by country Europe Eastern
warning_amber
One or more licenses for this book have been acquired by your organisation details

My Seven Lives is the English translation of the best-selling memoir of Slovak journalist Agneša Kalinová (1924–2014): Holocaust survivor, film critic, translator, and political prisoner. An oral history written with her colleague Jana Juráňová, My Seven Lives provides a window into Jewish history, the Holocaust, and the cultural evolution of Central and Eastern Europe. The conversational approach gives the book a relatable immediacy that vividly conveys the tone and temperament of Agneša, bringing out her lively personality and extraordinary ability to stay positive in the face of adversity.

Each chapter reflects a distinct period of Agneša’s long and tumultuous life. Her idyllic childhood gives way to the rise of Nazism and restrictions of the anti-Jewish legislation, which led to deportations and her escape to Hungary, where she found refuge in a Budapest convent. Surviving the Holocaust, she returned to Slovakia and married writer Ján Ladislav Kalina. They embraced communism, and Agneša began her career as a journalist and film critic and became involved in the Prague Spring, ending with the Soviet-led invasion of Czechoslovakia in 1968. Agneša and her husband lost their jobs and were imprisoned, which led to their decision to immigrate to West Germany. She found a new career as a political commentator for Radio Free Europe, and after decades of political oppression, Agneša lived to see the euphoric days of the Velvet Revolution and its freeing aftermath.

My Seven Lives shows the impact of an often brutal twentieth century on the life of one remarkable individual. It’s a story of survival, perseverance, and ultimately triumph.