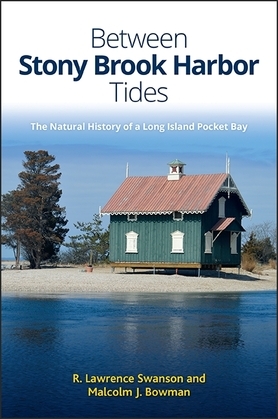 Examines the ecological and historical significance of the harbor and what it can bring to future residents.

Stony Brook Harbor, or Three Sisters Harbor as it was known historically, is perhaps the most pristine of the Long Island north shore pocket bays. Untouched by major commercialization, it has been designated a Significant Coastal Fish and Wildlife Habitat by the New York State Department of State and a Significant Coastal Habitat by the US Fish and Wildlife Service. Despite these designations, however, there is constant pressure to increase development of and around the harbor.

Between Stony Brook Harbor Tides interweaves scientific understandings of the harbor with a consideration of its colorful history to inform and educate a general audience about its unique and delicate state. Data is used to illustrate the harbor?s tides and currents and to show how they influence geological processes and pollution susceptibility. Storm surge measurements going back to the early 1990s document some of the extreme high waters experienced, and descriptions of some of the more interesting or important marine species of plants and animals found in the harbor are also included. The book discusses the century-long conflicts that local residents have fought in order to preserve this beautiful place, and it documents the tools that currently exist to help manage the harbor well into the twenty-first century. An excellent supplement to any high school or undergraduate environmental course, Between Stony Brook Harbor Tides provides readers with a basis for embracing the significance of the harbor and what it can bring to future residents.