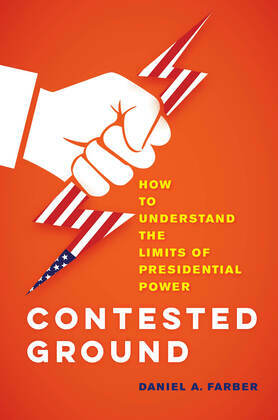 by Dan A. Farber (Author)
Buy for $26.95 Excerpt
Nonfiction Law Public Constitutional Social science Political science Government Executive branch Constitutions
warning_amber
One or more licenses for this book have been acquired by your organisation details

The Trump presidency was not the first to spark contentious debates about presidential power, but its impact on these debates will reverberate far beyond his term. The same rules must apply to all presidents: those whose abuses of power we fear, as well as those whose exercises of power we applaud. In this brief but wide-ranging guide to the presidency, constitutional law expert Daniel Farber charts the limits of presidential power, from the fierce arguments among the Framers to those raging today. Synthesizing history, politics, and settled law, Contested Ground also helps readers make sense of the gaps and gray areas that fuel such heated disputes about the limits of and checks on presidential authority.

From appointments and removals to wars and emergencies, Contested Ground investigates the clashes between branches of government as well as between presidential power and individual freedom. Importantly, Farber lays out the substance of constitutional law and the way it is entwined with constitutional politics, a relationship that ensures an evolving institution, heavily shaped by the course of history. The nature of the position makes it difficult to strike the right balance between limiting abuse of power and authorizing its exercise as needed. As we reflect on the long-tailed implications of a presidency that tested these limits of power at every turn, Contested Ground will be essential reading well after today’s political climate stabilizes (or doesn’t).