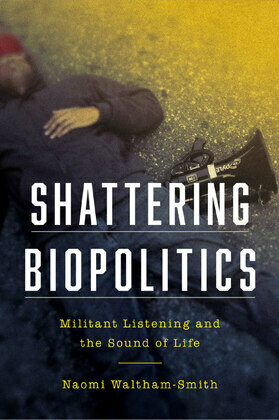 A missed phone call. A misheard word. An indiscernible noise. All these can make the difference between life and death. Failures to listen are frequently at the root of the marginalization and exclusion of certain forms of life. Audibility decides livability. Shattering Biopolitics elaborates for the first time the intimate and complex relation between life and sound in recent European philosophy, as well as the political stakes of this entanglement.

Nowhere is aurality more pivotal than in the dialogue between biopolitical theory and deconstruction about the power over and of life. Closer inspection of these debates reveals that the main points of contention coalesce around figures of sound and listening: inarticulate voices, meaningless sounds, resonant echoes, syncopated rhythms, animal cries, bells, and telephone rings.

Shattering Biopolitics stages a series of “over-hearings” between Jacques Derrida and Giorgio Agamben who often mishear or completely miss hearing in trying to hear too much. Notions of power and life are further diffracted as Hélène Cixous, Catherine Malabou, and Jean-Luc Nancy join in this high-stakes game of telephone. This self-destructive character of aurality is akin to the chanciness and risk of death that makes life all the more alive for its incalculability.

Punctuating the book are a series of excurses on sound-art projects that interrogate aurality’s subordination and resistance to biopower from racialized chokeholds and anti-migrant forensic voice analysis to politicized speech acts and activist practices of listening.

Shattering Biopolitics advances the burgeoning field of sound studies with a new, theoretically sophisticated analysis of the political imbrications of its object of inquiry. Above all, it is sound’s capacity to shatter sovereignty, as if it were a glass made to vibrate at its natural frequency, that allows it to amplify and disseminate a power of life that refuses to be mastered.