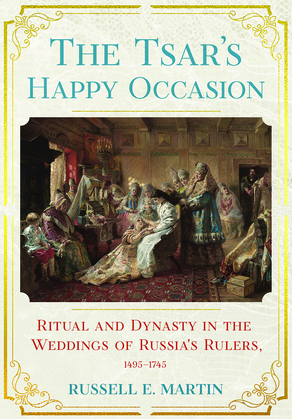 by Russell E. Martin (Author)
Buy for $29.99 Excerpt
Nonfiction History History by country Europe Russia Medieval Religion Christianity
warning_amber
One or more licenses for this book have been acquired by your organisation details

The Tsar's Happy Occasion shows how the vast, ornate affairs that were royal weddings in early modern Russia were choreographed to broadcast powerful images of monarchy and dynasty. Processions and speeches emphasized dynastic continuity and legitimacy. Fertility rites blended Christian and pre-Christian symbols to assure the birth of heirs. Gift exchanges created and affirmed social solidarity among the elite. The bride performed rituals that integrated herself and her family into the inner circle of the court.

Using an array of archival sources, Russell E. Martin demonstrates how royal weddings reflected and shaped court politics during a time of dramatic cultural and dynastic change. As Martin shows, the rites of passage in these ceremonies were dazzling displays of monarchical power unlike any other ritual at the Muscovite court. And as dynasties came and went and the political culture evolved, so too did wedding rituals. Martin relates how Peter the Great first mocked, then remade wedding rituals to symbolize and empower his efforts to westernize Russia. After Peter, the two branches of the Romanov dynasty used weddings to solidify their claims to the throne.

The Tsar's Happy Occasion offers a sweeping, yet penetrating cultural history of the power of rituals and the rituals of power in early modern Russia.