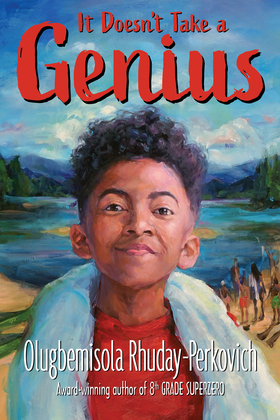 It Doesn't Take a Genius

A hilarious and moving coming-of-age tale that explores the intersection between self and community and the complexity of Black identity as a boy wonders: if he's not who he's always thought he was, who exactly can he be?

Emmett and his older brother Luke have always been "Batman and Robin," though they're quick to bicker about who's who. Spending the summer at a historic Black summer camp seems like a wonderful adventure for the two to share, but since Luke is there as a junior counselor, he seems to spend all of his time being everyone else's big brother, and ignoring Emmett.

As Luke seems to be moving on to new adventures, Emmett struggles in unexpected ways, especially in swim class and the "It Takes A Village" entrepreneurship class. Without his brother to turn to for support, Emmett works to build a new crew of "superfriends," who'll help him plan something spectacular for the end-of-camp awards night and celebration. Along the way, Emmett learns that no matter what, there can be many ways to define family.