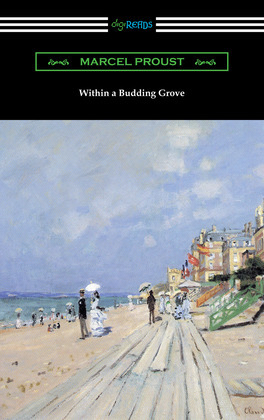 Within a Budding Grove

by Marcel Proust (Author)
Buy for $9.99 Excerpt
Fiction Classics
warning_amber
One or more licenses for this book have been acquired by your organisation details

First published in 1919, ?Within a Budding Grove? is the second novel in the ?In Search of Lost Time? series by famed French author Marcel Proust. Originally intended to be published in 1914, but delayed by the onset of World War I, ?Within a Budding Grove? was awarded the Prix Goncourt in 1919 and instantly catapulted Proust to international fame. The novel follows the narrator from the first volume, ?Swann?s Way?, from childhood to adolescence. He grows bored with Swann?s daughter, Gilberte, and becomes infatuated with a new girl he meets while visiting the seaside town of Balbec with his grandmother. Albertine is a captivating beauty and the narrator enjoys spending time with her and her young and artistic friends. ?Within a Budding Grove? explores the theme of involuntary memory, where common everyday occurrences trigger recollections of the past, which is a central concern of Proust?s ?In Search of Lost Time?. Proust explores how childhood memories and impressions continue to affect a person for years, even as many of the specifics of the memories are lost to time and become meaningless. Proust?s novel is a timeless study of adolescent love. This edition follows the translation of C. K. Scott Moncrieff.