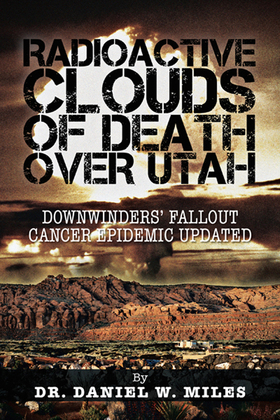 Radioactive Clouds of Death over Utah

by Dr. Daniel W. Miles (Author)
Buy for $3.99 Excerpt
Nonfiction Science and technics Science Environmental science
warning_amber
One or more licenses for this book have been acquired by your organisation details

I have completed the manuscript with the tentative title Radioactive Clouds of Death Over Utah.. From 1950 to the 1958 moratorium on atmospheric testing, the Atomic Energy Commission detonated over 100 atomic bombs at the Nevada Test Site. The inhabitants of St.
George, Utah--the so-called downwinders--were repeatedly in the fly zone of these toxic, wind-blown clouds--so much so that St. George became known nationwide as Fallout City, USA.
According to the back cover of John Fuller?s 1984 best seller, The Day We Bomb Utah: America?s Most Lethal Secret, ?Within a few years, a plague of cancer and birth defects had ripped through the area---a plague that may have caused the cancer-related deaths of John Wayne and over 100 other cast and crew members of The Conquerer which was filmed only miles from the test site.? (Actually, it was filmed only five miles from St. George.)
Utah Congressman Jim Matheson alleged in a recent op-ed article in the Deseret News that the horrendous legacy of radioactive fallout is still killing downwinders. ?Thousands of citizens throughout the West continue to get sick and die from radiation-exposure-caused illnesses.?
From an editorial in the February 15, 2001 issue of the Deseret News:
??the federal government literary sacrificed the health of thousands of unsuspecting Utahan and Nevadans.?
The focus of Radioactive Clouds of Death Over Utah is to retrospectively consider both the short-term and long-term health effects of radioactive fallout exposure on downwinders from the perspectives of the downwinders, the tort lawyers, the government itself, politicians, producers of five television documentaries, writers of six popular books, hundreds of magazine and newspaper articles and many scientific studies on fallout health effects on Utah residents. Recently the Utah press has featured many fallout-cancer stories giving much weight to anecdotal accounts---downwinders have been featured in the Deseret News 265 times in the last decade.
On April 12, 2011 U. S. Senator Tom Udall (D-NM) led a bipartisan group of senators in introducing S-791, the Radiation Exposure Compensation Act Amendments of 2011, which would among other things expand compensation to downwinders in all counties in Idaho, Montana, Colorado, New Mexico, and to areas not now covered in Utah, Nevada, and Arizona.
Today, with heightened fears about radiation leaks from damage nuclear power plants in Japan and the possibilities of nuclear terrorism, the discussion of fallout-induced cancers in this book provides valuable basic information about what is known about exposure to radiation and its health risks. A balanced perception of the health risks of ionizing radiation is of great societal importance to issues as varied as radiological terrorism, the future of nuclear power, nuclear waste storage, occupational radiation exposure, the clean-up of nuclear waste sites, medical x-rays (whole-body scanning by computed tomography results in much higher organ doses of radiation than conventional single-film x-rays), manned space exploration, and frequent-flyer risks.