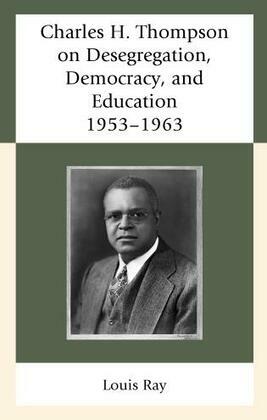 by Louis Ray (Author)
Buy for $38.00 Excerpt
Nonfiction Biography & autobiography Educators History History by country United States
warning_amber
One or more licenses for this book have been acquired by your organisation details

The goals of achieving equal citizenship rights for African Americans and international respect for human rights inspired Charles H. Thompson to focus his attention on ending segregation as public policy in the United States. As editor of The Journal of Negro Education, from 1932 to 1963, Thompson tirelessly championed equal educational and economic opportunities for African Americans and other targets of discrimination. Charles H. Thompson on Desegregation, Democracy, and Education captures the evolving struggle for civil rights from the perspective of an education insider, brilliant scholar-activist, and arguably the leading dean in African American higher education between 1938 and 1963.

This study focuses on Thompson's efforts, between 1953 and 1963, to mobilize his readers, including African American teachers, to support the civil rights movement including voter registration drives, boycotts, the sit-ins, as well as the NAACP litigation campaign. He encouraged them to support principled, African American leaders such as Dr. Martin Luther King, Jr., and their campaigns for social justice. Thompson remained confident that they and their allies would prevail so long as they adhered to the ethical principles that informed their movement and applied political and economic pressure intelligently. The desegregation of public education and the strengthening of African American higher education, for Thompson, served as wedges for extending democracy in the US.