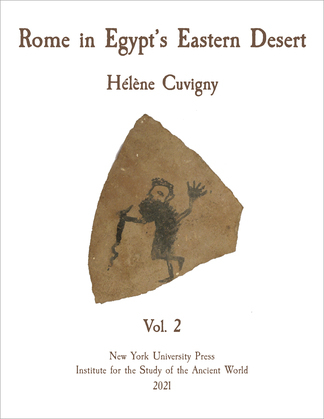 by Hélène Cuvigny (Author), Roger S. Bagnall (Editor)
Buy for $75.00 Excerpt
Nonfiction History Ancient Rome Social science Archaeology
warning_amber
One or more licenses for this book have been acquired by your organisation details

Rome in Egypt’s Eastern Desert is a two-volume set collecting Hélène Cuvigny’s most important articles on Egypt’s Eastern Desert during the Roman period. The excavations she directed uncovered a wealth of material, including tens of thousands of texts written on pottery fragments (ostraca). Some are administrative texts, but many more are correspondence, both official and private, written by and to the people (mostly but not all men) who lived and worked in these remote and harsh environments, supported by an elaborate network of defense, administration, and supply that tied the entire region together. The contents of Rome in Egypt’s Eastern Desert have all been published earlier in peer-reviewed venues, but most appear here for the first time in English. All of the contributions have been checked or translated by the editor and brought up to date with respect to bibliography, and some have been significantly rewritten by the author, in order to take account of the enormous amount of new material discovered since the original publications. A full index makes this body of work far more accessible than it was before. This book assembles into one collection thirty years of detailed study of this material, conjuring in vivid detail the lived experience of those who inhabited these forts—often through their own expressive language—and the realia of desert geography, military life, sex, religion, quarry operations, and imperial administration in the Roman world.