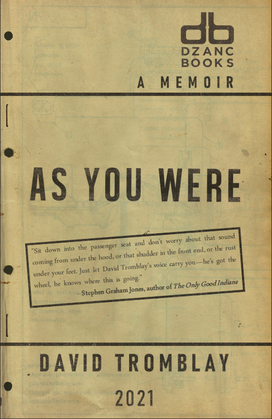 by David Tromblay (Author)
Buy for $9.99 Excerpt
Nonfiction Biography & autobiography Native Americans Military
warning_amber
One or more licenses for this book have been acquired by your organisation details

A hypnotic, brutal, and unstoppable coming-of-age story echoing from within the aftershocks set off by the American Indian boarding schools of generations past, fanned by the flames of nearly fifteen years of service in the Armed Forces, exposing a series of inescapable prisons and the invisible scars of attempted erasure.

When he learns his father is dying, David Tromblay ponders what will become of the monster?s legacy and picks up a pen to set the story straight.

In sharp and unflinching prose, he recounts his childhood bouncing between his father, who wrestles with anger, alcoholism, and a traumatic brain injury; his grandmother, who survived Indian boarding schools but mistook the corporal punishment she endured for proper child-rearing; and his mother, a part-time waitress, dancer, and locksmith, who hides from David?s father in church basements and the folded-down back seat of her car until winter forces her to abandon her son on his grandmother?s doorstep.

For twelve years, he is beaten, burned, humiliated, locked in closets, lied to, molested, seen and not heard, until his talent for brutal violence meets and exceeds his father?s, granting him an escape.

Years later, David confronts the compounded traumas of his childhood, searching for the domino that fell and forced his family into the cycle of brutality and denial of their own identity.