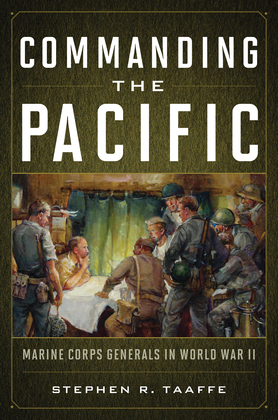 by Stephen R. Taaffe (Author)
Buy for $34.95 Excerpt
Nonfiction Biography & autobiography Military History World War II
warning_amber
One or more licenses for this book have been acquired by your organisation details

The Marine Corps covered itself in glory in World War II with victories over the Japanese in hard-fought battles such as Guadalcanal, Tarawa, and Iwo Jima. While these battles are well known, those who led the Marines into them have remained obscure until now.

In Commanding the Pacific: Marine Corps Generals in World War II, Stephen R. Taaffe analyzes the fifteen high-level Marine generals who led the Corps’ six combat divisions and two corps in the conflict. He concludes that these leaders played an indispensable and unheralded role in organizing, training, and leading their men to victory. Taaffe insists there was nothing inevitable about the Marine Corps’ success in World War II. The small pre-war size of the Corps meant that its commandant had to draw his combat leaders from a small pool of officers who often lacked the education of their Army and Navy counterparts. Indeed, there were fewer than one hundred Marine officers with the necessary rank, background, character, and skills for its high-level combat assignments. Moreover, the Army and Navy froze the Marines out of high-level strategic decisions and frequently impinged on Marine prerogatives. There were no Marines in the Joint Chiefs of Staff or at the head of the Pacific War’s geographic theaters, so the Marines usually had little influence over the island targets selected for them. In addition to bureaucratic obstacles, constricted geography and vicious Japanese opposition limited opportunities for Marine generals to earn the kind of renown that Army and Navy commanders achieved elsewhere. In most of its battles on small Pacific War islands, Marine generals had neither the option nor inclination to engage in sophisticated tactics, but they instead relied in direct frontal assaults that resulted in heavy casualties. Such losses against targets of often questionable strategic value sometimes called into question the Marine Corps’ doctrine, mission, and the quality of its combat generals.
Despite these difficulties, Marine combat commanders repeatedly overcame challenges and fulfilled their missions. Their ability to do so does credit to the Corps and demonstrates that these generals deserve more attention from historians than they have so far received.