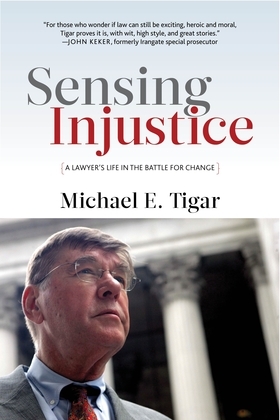 by Michael E. Tigar (Author)
Buy for $16.00 Excerpt
Nonfiction Biography & autobiography Lawyers & judges Law History of law Personal memoirs
warning_amber
One or more licenses for this book have been acquired by your organisation details

By the time he was 26, Michael Tigar was a legend in legal circles well before he would take on some of the highest-profile cases of his generation. In his first US Supreme Court case—at the age of 28—Tigar won a unanimous victory that freed thousands of Vietnam War resisters from prison. Tigar also led the legal team that secured a judgment against the Pinochet regime for the 1976 murders of Pinochet opponent Orlando Letelier and his colleague Ronni Moffitt in a Washington, DC car bombing. He then worked with the lawyers who prosecuted Pinochet for torture and genocide. A relentless fighter of injustice—not only as a human rights lawyer, but also as a teacher, scholar, journalist, playwright, and comrade—Tigar has been counsel to Angela Davis, Jamil Abdullah Al-Amin (H. Rap Brown), the Chicago Eight, and leaders of the Black Panther Party, to name only a few. It is past time that Michael Tigar wrote his memoir.

Sensing Injustice: A Lawyer's Life in the Battle for Change is a vibrant literary and legal feat. In it, Tigar weaves powerful legal analysis and wry observation through the story of his remarkable life. The result is a compelling narrative that blends law, history, and progressive politics. This is essential reading for lawyers, for law students, for anyone who aspires to bend the law toward change.