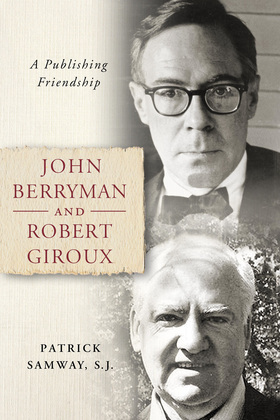 This engaging study provides new perspectives on the lives and work of two major figures in American poetry and publishing in the second half of the twentieth century: Robert Giroux (1914–2008), editor-in-chief of Harcourt, Brace and Company and later of Farrar, Straus and Giroux, and John Berryman (1914–1972), Pulitzer Prize–winning poet and Shakespearean scholar who also received a National Book Award and a Bollingen Prize for Poetry. From their first meeting as undergraduates at Columbia College in New York City in the early 1930s, Giroux and Berryman became lifelong friends and publishing partners. Patrick Samway received unprecedented access to Giroux’s letters and essays. By incorporating either sections or whole letters of the correspondence between Berryman and Giroux into this book, Samway makes available for the first time a historical account of their relationship, including revealing portraits of their personal lives.

As Giroux edited over a dozen books by Berryman, his letters to the poet were often filled with editorial details and pertinent observations, emanating from his genuine affection for his friend, whose talent he never doubted, even as Berryman endured prolonged periods of hospitalization due to his alcoholism. Giroux gave Berryman the greatest gift he could: sustained encouragement to continue writing without trying to manipulate or discourage him in any way. But Giroux also had a deep-seated secret desire to surpass the essays written about Shakespeare by Berryman, as well as the book on Shakespeare written by their mutual professor Mark Van Doren. Giroux’s volume, The Book Known as Q: A Consideration of Shakespeare’s Sonnets, was finally published in 1982. Samway’s fascinating account of a gifted but troubled poet and his devoted yet conflicted editor will interest fans of Berryman and all readers and students of American poetry.