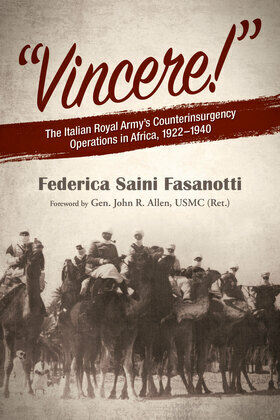 by Federica Saini Fasanotti (Author)
Buy for $44.00 Excerpt
Nonfiction History History by country Europe Italy Africa Nature, recreation and sports Antiques & collectibles Military Special forces
warning_amber
One or more licenses for this book have been acquired by your organisation details

Based on ten years of study in the Italian archives and on the ground, ?Vincere? examines a little-known topic: the counterinsurgency operations carried out by the Italian Royal Army in Libya and Ethiopia from 1922 to 1941.

Italian forces faced local populations while conducting counterinsurgency (COIN) operations in what was, for them, a new theater of war. In Libya, the rebellion was quelled in the space of ten years, at an admittedly high price for the regional forces. In Ethiopia, where COIN operations were interrupted by World War II, the available data suggests that military actions, accompanied by a more responsible policy toward the population, would have eventually defeated the insurgency. The use of air power in Ethiopia made a huge difference, and its lessons were learned long before the French experience in Algeria. The Italians waged counterinsurgency operations over 20 years in two geographically separate theaters, and in two very different operational environments. Much can be learned from these different experiences.