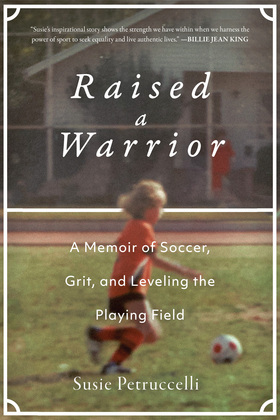 Massive popularity of women’s soccer: According to Nielsen, approximately 14.3 million US viewers tuned in to watch the 2019 Women’s World Cup final on television; Fox Sports put the total streaming audience at 20 million. This huge viewership speaks to the massive audience interested in women's soccer, an industry which, according to the Wall Street Journal, garnered approximately $50.8 million in revenue between 2016 and 2018. As celebrities like Natalie Portman, Serena Williams, America Ferrera, Jennifer Garner, and Eva Longoria make headlines for their investment in Los Angeles’s forthcoming women’s soccer team, Angel City FC, scores of everyday Americans have become enthralled with women’s soccer, and this compelling true story, which follows a woman's journey on the field, taps into that interest.

Women's soccer in the headlines: In March 2019, the US women’s national soccer team filed a gender-discrimination lawsuit against the U.S. Soccer Federation, garnering praise from public figures. Although the court ruled against the team in May 2020, the team is determined to keep up the fight and bolstered by the public encouragement of many, including Joe Biden. As this story is sure to unfold in the months to come, women's soccer will remain in the headlines. The author will be able to leverage her own experience in the sport for trial-related op-eds and guest features.

Award-winning story: Raised a Warrior is the recipient of the Vikki Orvice Prize in conjunction with Women in Football, an accomplishment that speaks to the literary prowess of the author and the strength of the storytelling. Fans of literary sports writing like William Finnegan’s in Barbarian Days (Penguin, 2016, 227,000 RTD), Leanne Shapton’s in Swimming Studies (Penguin, 2016, 10,600 RTD), and Eduardo Galeano’s in Soccer in Sun and Shadow (Hachette, 2013, 19,500 RTD), will be drawn to Petruccelli’s thoughtful and engaging meditation on soccer.

Publication date to coincide with beginning of National Women’s Soccer League season: The release of Raised a Warrior is tied to the beginning of the National Women’s Soccer League season, which runs from April to October. This book will appeal to those engaged fans looking to supplement the season with as much soccer-related content as possible and is a shoo-in for media focused on soccer and female athletes.

Successful comps, but fills a hole in the market: Women’s soccer stars' memoirs sell extraordinarily well, evidenced by the recent success of Megan Rapinoe’s One Life (Penguin, November 2020, 15,400 RTD), but for most people, these megastars are unrelatable. Here we have a more relatable memoir, an author who the masses can connect with and regular people can see themselves in, finding connections between her experience and theirs.

Author is an inspiration for soccer players everywhere: According to the New York Post, an estimated 30 million women play soccer worldwide—4 million more than in 2006. This growing league of female soccer players speaks to a huge market of female readers who will find inspiration in Petruccelli and jump at the chance to read her memoir.

Well-connected author: Petruccelli has earned praise from titans of sport like Billie Jean King, Pelé, and Julie Foudy. These iconic athletes will celebrate Raised a Warrior on their platforms, guaranteeing wide public interest in the book. The author will also leverage her own social media to forge more connections with readers and influential sports figures in the interest of driving sales.

Documentary promotion: Author is producer of Warrior Women of Football, a groundbreaking global project with a much-anticipated feature-length documentary film, Warriors of a Beautiful Game, currently in post-production for studio shopping in 2021, tie-in documentary series, and a social impact campaign. The film's directors are Kely Nascimento-Deluca, daughter of Brazilian soccer legend Pelé, and NYC/LA-based producer Justin Noto of Agon Creative, and other producers include Pelé himself, FIFA Women's World Cup champion and Olympic gold medalist Julie Foudy, and Stéphane Mbia, a two-time FIFA Men's World Cup competitor and Olympic athlete. A wide range of global superstar athletes and nonprofits are also involved and will rally behind the author in supporting her book, in which she takes readers around the world with her during the production process and introduces people featured in the film or involved in the project.