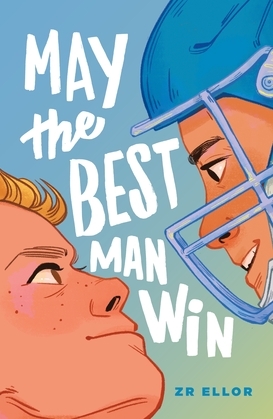 May the Best Man Win

A trans boy enters a throw-down battle for the title of Homecoming King with the boy he dumped last summer in ZR Ellor's contemporary YA debut.

Jeremy Harkiss, cheer captain and student body president, won’t let coming out as a transgender boy ruin his senior year. Instead of bowing to the bigots and outdate school administration, Jeremy decides to make some noise—and how better than by challenging his all-star ex-boyfriend, Lukas for the title of Homecoming King?

Lukas Rivers, football star and head of the Homecoming Committee, is just trying to find order in his life after his older brother’s funeral and the loss of his long-term girlfriend—who turned out to be a boy. But when Jeremy threatens to break his heart and steal his crown, Lukas kick starts a plot to sabotage Jeremy’s campaign.

When both boys take their rivalry too far, the dance is on the verge of being canceled. To save Homecoming, they’ll have to face the hurt they’re both hiding—and the lingering butterflies they can’t deny.