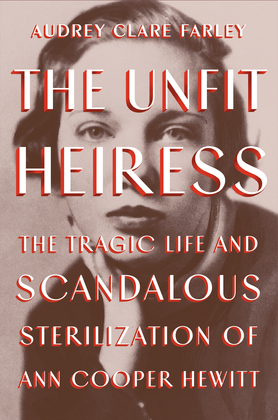 by Audrey Clare Farley (Author)
Excerpt
Nonfiction Biography & autobiography Rich & famous Women
EPUB
Unlimited loans, 2 years, One at a time
Details
For readers of The Immortal Life of Henrietta Lacks and The Phantom of Fifth Avenue, a page-turning drama of fortunes, eugenics and women's reproductive rights framed by the sordid court battle between Ann Cooper Hewitt and her socialite mother.

At the turn of the twentieth century, American women began to reject Victorian propriety in favor of passion and livelihood outside the home. This alarmed authorities, who feared certain "over-sexed" women could destroy civilization if allowed to reproduce and pass on their defects. Set against this backdrop, The Unfit Heiress chronicles the fight for inheritance, both genetic and monetary, between Ann Cooper Hewitt and her mother Maryon.

In 1934, aided by a California eugenics law, the socialite Maryon Cooper Hewitt had her "promiscuous" daughter declared feebleminded and sterilized without her knowledge. She did this to deprive Ann of millions of dollars from her father's estate, which contained a child-bearing stipulation. When a sensational court case ensued, the American public was captivated. So were eugenicists, who saw an opportunity to restrict reproductive rights in America for decades to come.

This riveting story unfolds through the brilliant research of Audrey Clare Farley, who captures the interior lives of these women on the pages and poses questions that remain relevant today: What does it mean to be "unfit" for motherhood? In the battle for reproductive rights, can we forgive the women who side against us? And can we forgive our mothers if they are the ones who inflict the deepest wounds?
Publication date
April 20, 2021
Publisher
Grand Central Publishing
ISBN
9781538704929
Paper ISBN
9781538753354
File size
2 MB