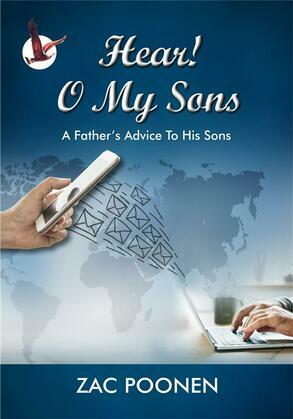 by Zac Poonen (Author)
Buy for €3.99 Excerpt
Nonfiction Health & fitness Daily living Family relationships Parent & adult child Fatherhood
warning_amber
One or more licenses for this book have been acquired by your organisation details

This book contains extracts from emails that I wrote to my four sons when they were single and away from home. They were studying in colleges at first and then working. They were in their late teens and in their twenties at that time.

Fathers are told to bring up their children "in the instruction of the Lord". So, most of what I wrote was instruction from the Word of God that would lead them to be devoted to the Lord Jesus. I wanted them to be established from a young age in the truths of God's Word, since I knew that, that alone would preserve them as young men in the midst of "an evil and adulterous generation" (Matthew 16:4). I also wanted them to be able to share God's truth accurately with others.

I emphasised and repeated some matters many times in my mails, because of their paramount importance. Some matters are repeated numerous times in the New Testament too, for the same reason. I emphasised holiness, taking up the cross and the overcoming life primarily - because these important truths were not being emphasised in Christendom in general.

I exhorted my sons in those days to listen regularly to cassettetapes of my messages. Today, you can watch my messages on YouTube and on the CFC website - www.cfcindia.com

One chapter in this book contains the advice I gave them on choosing a life-partner and getting married. All four of them followed my advice and married godly young women, as described in that chapter. For this I am deeply thankful to the Lord.

It is more than 25 years now since I wrote some of these letters. My views remain the same and I stand by everything that I wrote then.

I have combined all the emails together here, removing headings, dates, greetings, names and signature lines, since these would serve no purpose in this book.

This book has been divided into chapters only to make it easier to read. The chapters have not been divided subject-wise or in any order of priority.

90% of what I wrote to my sons would be equally applicable to young girls as well. So they too can read this book.

This book should be read slowly, for it contains the substance of many mails on different topics. There is "strong meat" here, and not just "milk". So my recommendation would be that you read only one chapter a day and stop and think about what you have read and absorb the truths in that chapter, before moving on. And let me urge you to look up all the Scriptures quoted herein and meditate on them. In that way, your life can be radically changed for the better - in a very short time.

I pray that this book will be a blessing to all young people who read it.