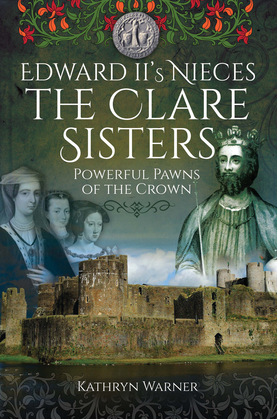 The de Clare sisters Eleanor, Margaret and Elizabeth were born in the 1290s as the eldest granddaughters of King Edward I of England and his Spanish queen Eleanor of Castile, and were the daughters of the greatest nobleman in England, Gilbert “the Red” de Clare, Earl of Gloucester. They grew to adulthood during the turbulent reign of their uncle Edward II, and all three of them were married to men involved in intense, probably romantic or sexual, relationships with their uncle.

When their elder brother Gilbert de Clare, Earl of Gloucester, was killed during their uncle’s catastrophic defeat at the battle of Bannockburn in June 1314, the three sisters inherited and shared his vast wealth and lands in three countries, but their inheritance proved a poisoned chalice. Eleanor and Elizabeth, and Margaret’s daughter and heir, were all abducted and forcibly married by men desperate for a share of their riches, and all three sisters were imprisoned at some point either by their uncle Edward II or his queen Isabella of France during the tumultuous decade of the 1320s. Elizabeth was widowed for the third time at twenty-six, lived as a widow for just under forty years, and founded Clare College at the University of Cambridge.