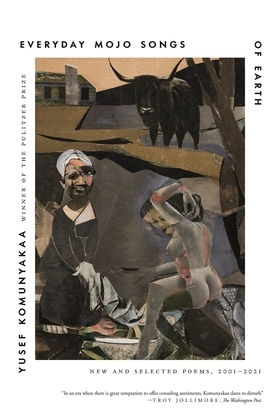 New and selected poems from the great Pulitzer Prize–winning poet

Everyday Mojo Songs of Earth brings together selected poems from the past twenty years of Yusef Komunyakaa’s work, as well as new poems from the Pulitzer Prize winner. Komunyakaa’s masterful, concise verse conjures arresting images of peace and war, the natural power of the earth and of love, his childhood in the American South and his service in Vietnam, the ugly violence of racism in America, and the meaning of power and morality.

The new poems in this collection add a new refrain to the jazz-inflected rhythms of one of our “most significant and individual voices” (David Wojahn, Poetry). Komunyakaa writes of a young man fashioning a slingshot, workers who “honor the Earth by opening shine / inside the soil,” and the sounds of a saxophone filling a dim lounge in New Jersey. As April Bernard wrote in The New York Times Book Review, “He refuses to be trivial; and he even dares beauty.”

"Probably my favorite living poet. No one else taught me more about how important it was to think about how words make people feel. It's not enough for people to know something is true. They have to feel it's true." —Ta-Nehisi Coates, The New York Times Style Magazine