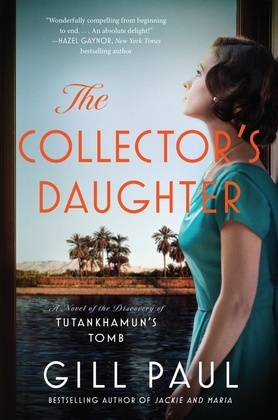 Bestselling author Gill Paul returns with a brilliant novel about Lady Evelyn Herbert, the woman who took the very first step into the tomb of Pharaoh Tutankhamun, and who lived in the real Downton Abbey, Highclere Castle, and the long after-effects of the Curse of Pharaohs.

Lady Evelyn Herbert was the daughter of the Earl of Carnarvon, brought up in stunning Highclere Castle. Popular and pretty, she seemed destined for a prestigious marriage, but she had other ideas. Instead, she left behind the world of society balls and chaperones to travel to the Egyptian desert, where she hoped to become a lady archaeologist, working alongside her father and Howard Carter in the hunt for an undisturbed tomb.

In November 1922, their dreams came true when they discovered the burial place of Tutankhamun, packed full of gold and unimaginable riches, and she was the first person to crawl inside for three thousand years. She called it the “greatest moment” of her life—but soon afterwards everything changed, with a string of tragedies that left her world a darker, sadder place.

Newspapers claimed it was “the curse of Tutankhamun,” but Howard Carter said no rational person would entertain such nonsense. Yet fifty years later, when an Egyptian academic came asking questions about what really happened in the tomb, it unleashed a new chain of events that seemed to threaten the happiness Eve had finally found.